It’s been a while since I’ve written a blog, mostly because I’ve been busy with my new coaching position at La Jolla High School. This job is part-time with full-time hours! But it’s a great place to work. If you’ve never been to La Jolla, California, book a trip to go… it’s beautiful! 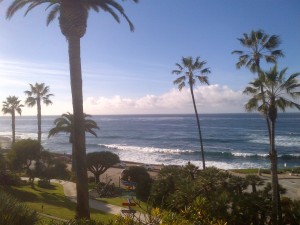 I love coaching. However, coaching high school track and field is not without its challenges. Seems like every kid has a dentist appointment during track practice. One of the biggest challenges is working the training around the track meet schedule. In the U.S., we place a lot of emphasis on competition at the high school level. From the second week of practice, we’ve had at least one and often two track meets per week. As the new coach of the team this season, I didn’t have the opportunity to train the kids prior to the first day of practice. I’ve had many discussions (some might call arguments) with parents about their kids over racing and how that’s not the method to become a good distance runner. When kids race too often at a young age, that causes a number of problems:

(1) Sacrifice aerobic development. This is probably the biggest issue. Given that the single biggest factor that affects distance running performance is how many weekly miles you run, so many track meets leaves little time to get the mileage done. In the U.S., most high school runners sacrifice their aerobic development in favor of racing and speed work, and they never become as good as they could be.

(2) Going anaerobic to often. Every time a high school runner runs a race, he or she is causing metabolic acidosis by dropping the pH in his or her muscles. This is detrimental to improving the athlete’s performance when it’s done too early and too often. One of the parents questioned how little time I’m devoting to speed work. I explained to him that every time his kids run a race, which has been multiple times per week from the second week of practice, they are getting speed work and going anaerobic. People don’t realize the effect of races. Most high school kids race themselves into shape every track season, with little attention given to proper training.

(3) Burnout. Racing a lot not only is physically difficult; it’s also psychologically difficult. There’s only so many times a runner can go to the well. With many races, it’s easy for kids to get burned out.

Parents keep telling me that if their kids don’t race a lot throughout the season, they will lose interest and quit the team. If that’s true or not, I don’t know. I find it’s a delicate balance to train them smartly on one hand and keep them happy by racing on the other hand. Anyway, since I like to include lessons in my blog posts, here’s some lessons for everyone, learned from my first two months coaching high school after a 14-year hiatus from it:

(1) If you want to be good at something, whether it be running, cooking, or basket weaving, you have to spend a lot of time doing it.

(2) Don’t rest on your talents or laurels. If you’re talented, that’s great. But if you’re lucky enough to be talented, you have a responsibility to yourself and to others to work that talent. Like Steve Prefontaine once said, “To give anything less than your best is to sacrifice the gift.”

(3) If you want to be good at something, there are no excuses. There’s always time to run if it is important to you.

(5) It’s much better to focus on one thing and do it well than to spread yourself thin by doing many things. Don’t become a jack of all trades and a master of none. Very successful people are not well-rounded. They do one thing and do it better than everyone else.

(6) Don’t let one of the kids on the team pick a phrase for the back of the team T-shirts. Now the entire track and field team (and the coaches) are walking around school with T-shirts that say A Track Tive on the back of the shirt. Oy. Want to run smarter and better? Get a FREE book and consultation when you get a Run-Fit Training Program from my website!
http://revo2lutionrunning.com/trainingprograms

One Response to High School Coaching